In the panic to get it out into the field, it can be easy to overlook the extreme risks that slurry mixing and spreading can pose, particularly that of slurry gas. We discuss the dangers of slurry gas and what farmers can do to help prevent tragedy.

Slurry gas is a toxic mixture of gases created as a by-product of the fermentation of slurry. The most dangerous of these is hydrogen sulphide, which can quickly overcome and kill farm workers and livestock, even in the open air.

The gas is heavier than air and so has a tendency to linger around slurry pits, can knock out your sense of smell at higher concentrations and quickly displaces air from the lungs, meaning that only one breath can be enough to be fatal.

As soon as the mixing of slurry begins, the gas is released rapidly and in large quantities just like when a bottle of fizzy drink is shaken and then opened. It can also be responsible for multiple fatalities if attempts are made to rescue farm workers who have been overcome by the fumes.

The dangers posed by slurry gas should never be underestimated, however the HSENI advises that there are certain steps that farmers can take to ensure the safety of themselves, their employees and their livestock.

What to Do In An Emergency? 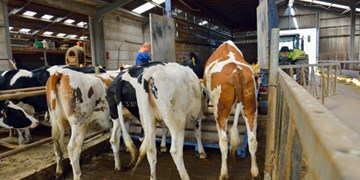 Over recent months, farming has been hugely affected by the rapid spread of Covid-19 which has spearheaded...

Getting ready for sheep breeding season

Even though breeding is a few months away yet, September is a good month to prepare and assess your flock of ewes...

The outbreak of COVID-19 has significantly affected all aspects of our lives, especially within our farming community